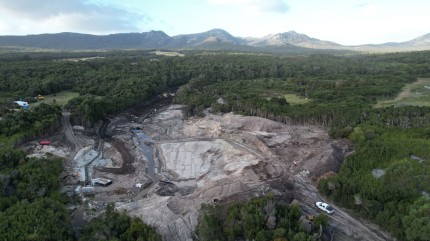 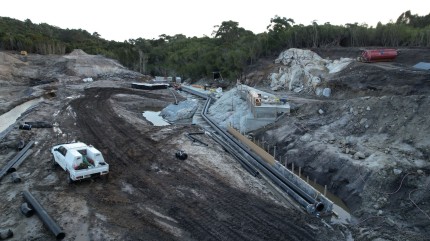 A complete rebuild of Henderson Dam is taking shape on Flinders Island.

“The original plan to upgrade Henderson Dam had been to build up from the existing embankment, however once we were able to dewater the dam and excavate back to the original clay core, we discovered it did not meet modern dam safety requirements, Mr Ward said.

“That’s not to say that the original dam was unsafe, but rather that it was not a suitable foundation for a dam with double the storage capacity.”

Mr Ward said what followed had been a progressive discovery and design process, excavating back to bedrock and sorting and stockpiling materials from the excavation.

“Full credit to the contractors, who have moved about 7 times the materials originally scoped and to the designers, who have then built those back into a uniquely Flinders dam wall design,” he said.

“As Flinders residents know all too well, getting specialised materials to the island is an expensive process so we want to re-use as much of what we excavate out of the site as possible.”

Construction has commenced on the new earth dam wall and new spillway. More than 500 cubic metres of concrete has been poured on the dam spillway which is designed for a 1 in 1000-year flood event to comply with modern dam safety standards.

With the complete redesign of the dam project and the additional work we needed to undertake, the works are now expected to be completed during January 2022.

“We will be relying on summer rain to replenish the dam at the beginning of next year and that may also mean the water restrictions will continue until then,” Mr Ward said.

“We are grateful to the Whitemark community for continuing to support the project by conserving water.”