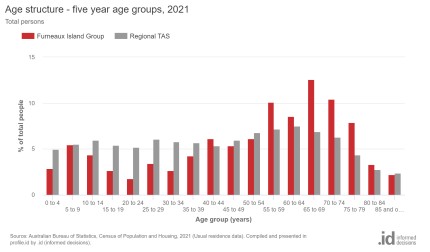 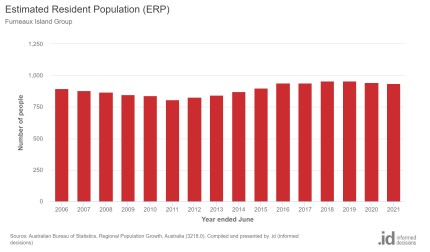 Estimated resident population and the change in number of people. (Source: Australian Bureau of Statistics, Regional Population Growth, Australia. Compiled and presented by the .id the population experts).

The Flinders Municipality Community Profile ID provides demographic analysis for the Council and smaller areas within it based on results from the 2021, 2016, 2011, 2006, 2001, 1996 and 1991 Censuses of Population and Housing. The profile is updated with population estimates when the Australian Bureau of Statistics (ABS) releases new figures.

Compare the Furneaux Groups population highlights – underneath Home tab on the left-hand side – with Regional Tasmania,* Tasmania and the rest of Australia.

*Regional Tasmania is all of Tasmania excluding Greater Hobart.

Follow the steps below to benchmark the Furneaux Region with other locations such as King Island, Tasmania and Australia.